Love it or Hate it? the Saga of a Shaker Box

OK, heads up! This post is going to be long; I am not writing this later, I already know it. I’ve been trying to write shorter posts lately but this will have to be an exception.

PTI released a new Template, a set of Shaker boxes. Great, I love shaker boxes and unfortunately don’t have any real ones so paper versions are perfect! I wanted to combine a few challenges as well so I started with yellow paper to go with a baby theme. The template pieces printed beautifully and I was ready to cut them out. If you have ever tried to attach a straight piece of paper to a round/oval one, you know the round one needs a ton of tabs cut beyond the desired shape to fold down and glue to the straight piece. 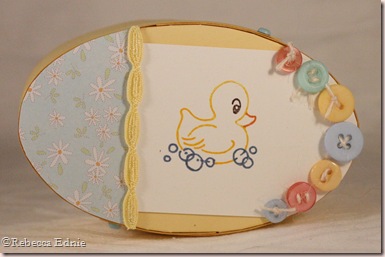 So this was part of the lovin’ of this project. Don’t care about my idea? then skip this paragraph, just know that I came up with a clever idea to save time! I realized the last thing I wanted to do was to cut all those tabs from the template (I always trace templates even if they are supposedly printable directly to the CS or DP.) and then trace them and cut them from the cardstock. And they aren’t hard to cut freehand if you have guidelines.So,  I cut around the outer parts of the tabs on the piece, called a tabbed oval, not down around each one, then I cut double slits, very close together along the score line in a few places and I removed the sliver of paper. Next, I printed up a second set of ovals, from these I cut off the tabs, cutting on the score line.  After that, first, I traced the untabbed oval on the CS, second, I over laid the tabbed one, sighting the pencil lines through the slits and traced around it. So what I ended up with is two concentric pencil line ovals, now all I have to do it cut little v’s out of the paper, from the outer oval to the inner oval which creates tabs. I know, this  may not make sense but if you buy this template it might matter to you! If you want, I could take pictures of the pieces to show you. 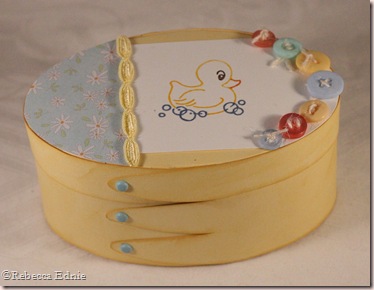 So here is the hatin’ part. I put the whole bottom together using the oval lid as the oval bottom. Not only didn’t the sides line up but even if I had chosen to leave it and cut a new oval lid, the lid wouldn’t fit! So I sat there for a few minutes wishing a bottle of Undu would miraculously appear in my hands and finally tried peeling it apart; yes this was crazy having used red line tape but strangely it sort of worked but the pieces ended up a bit mangled. Then I put it all back together, CORRECTLY. 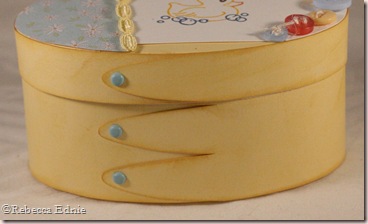 Now I was back to liking the project at least. It looks really cute from the outside, the little blue brads I chose look cute on the yellow CS. Now all I have to do is put in the liner, seems easy right? Nope, for some reason, probably the amount of ‘distressing’ the parts of the box received before assembly, the liner wants to bulge in places and crease in others, seriously?? I finally had to cut the liner twice to make it fit and this was after it was red line taped in (not so forgiving on thin DP) so no, the edges do NOT overlap and the error is NOT hidden! I did look really nice from the outside though so I was back to loving it. It is amazing how closely it resembles a real Shaker box! 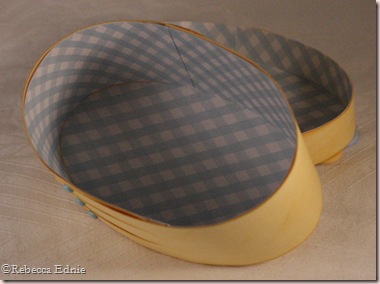 But now I decorated it. Oh no. {{SIGH}} Do you have any idea how hard it is to get paper on straight when working with an oval? And I HAD to chose a graphic sketch to work with! I figured because it was a circle sketch it might work well. And it would have helped if I’d had a straight line as a reference. On top of that, I find it a bit boring, maybe because I am so used to popping up, Nestabilities, border punches, paper piecing and Copic colouring; none of which I used here. The good news is that I can still enter it in a Laurie’s challenge #2, CDBC2 on Clearly Delightful to use a duck on your project to get a gorgeous fluffy-looking baby duck digi image she designed but I know I won’t win! I encourage you to enter too! The sketch was for Mojo 123 and Stamp Simply Challenge #125 to make a baby project.

Thanks to anyone who made it this far!

Posted by Rebecca Ednie at 9:24 pm

thanks for the ideas- the shaker box looks sweet- must have been a lot of work but the finished product is well worth it.