Yep, you read that right!  I won top spot for THIS card and was awarded a chance to work with The Shabby Tea Room design team for this week! I am so excited!

This week we were asked to take inspiration from the photo below AND make a gift or gift box or packaging. That was perfect for me! 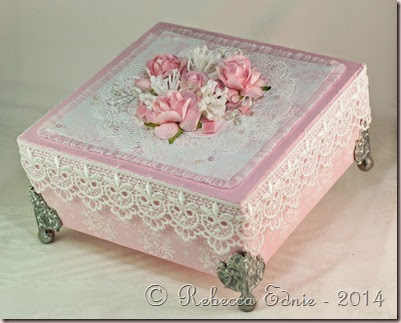 I painted a paper mache box with a base coat of gesso, then with acrylic paint. The gesso helps the paint I added embossing paste using a very detailed damask stencil. 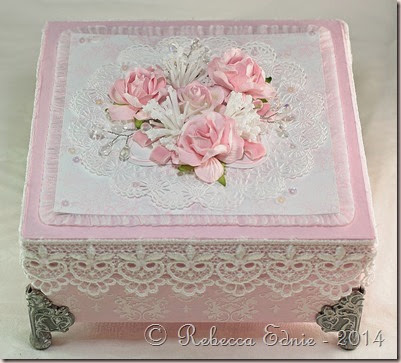 I added some feet by Tim Holtz which I distressed using white acrylic paint. I wasn’t sure how to glue them on but I found some No Nails which is a tube of super strong glue. It looks a lot like caulking but it is a different texture. It worked beautifully! 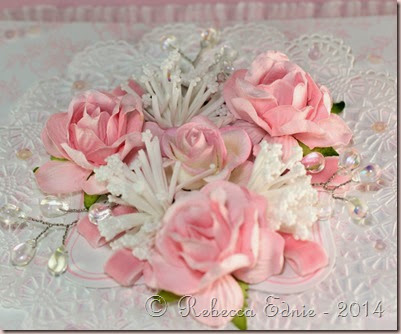 Here’s a closeup of the top. The roses are from Really Reasonable Ribbon and the white fluffy things are from Melissa Frances. I made the beaded sprigs. The layers on top are toile-stamped cardstock, then a doily, then a label die cut with a stamped edge and then all the florals. I tossed on a lot of sequins including some to accent the lace on the side of the lid. The toile-stamped paper also has a ruffled edge. 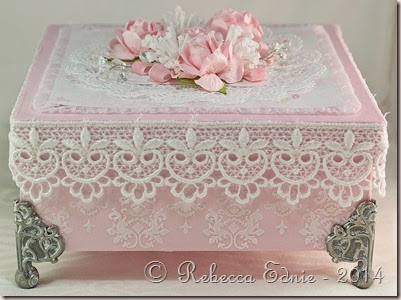 I think this is the best shot I got of the side with the lace and embossing. It’s near impossible to see the sequins since they are transparent but they do sparkle nicely. 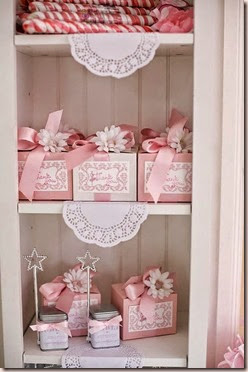 Isn’t this a gorgeous inspiration photo? I hope you are all inspired and come and join us at The Shabby Tea Room  this week. You have until Sunday evening to play along. Just make sure you don’t forget to make a gift or gift project. 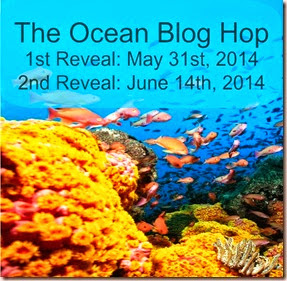 Welcome to my late entry for the Ocean Blog Hop. Between being being very busy and late with my blog post and the hostess missing my name so I wasn’t added to the original line up, I’m hoping I get at least a few comments! 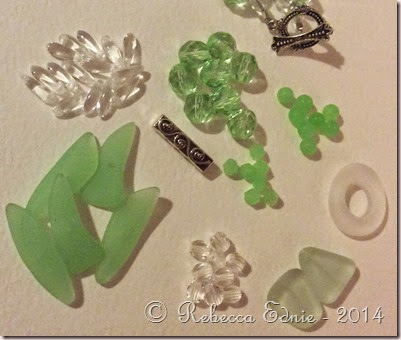 I’m afraid my before photos are dismal. I took them in low light with my iPad and as cool as Apple devices are, their phones are not known for their low light amazingness. This is of course not all I received, some were already in their pieces and I received a larger quantity of some that didn’t fit in the photo. Of the two small green ones, some are round and some are faceted. They seem to be cultured sea glass, the round ones were between the freeform stick shaped beads and the faceted were packaged separately. 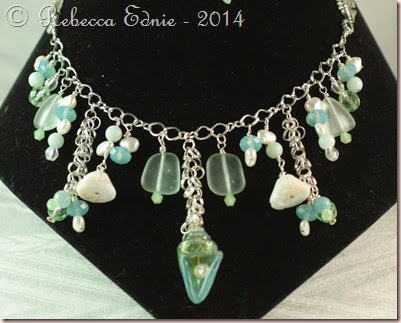 This is a really hard necklace to capture in one shot with the equipment I have anyway. I used the items above plus some shell beads, amazonite, Swarovski crystals, freshwater pearls and some nifty chain. 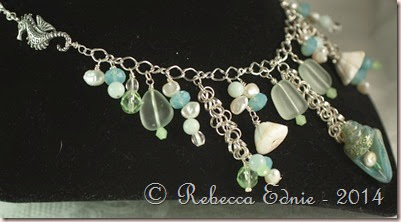 What I couldn’t show you above in the supply photo were the pretty sea horse charms I used in the necklace. I also used to have Swarovski crystal starfish on the end of the dangle with the circle chain and multiple beads at the end but as I only had one, I took it off for now. The focal bead is from Unicorne Beads which I bought from ArtBeads.

I’ve been wanting to try bead wrapping for a while so I thought I’d had a go of it. I’m semi-happy with it. I like the right far better than the left which was the first one I did. You get better the more you do right?

And now, my bracelet. Basic stringing and not that creative but I’ve never used spacer bars before so it was new for me. It wasn’t until after that I realized I had one more spacer bar and while I was making it, I’d been wishing I’d had another. But I’m never one to waste supplies and as I’d be wasting not just one strand of stringing wire but TWO, I just CAN’T restring it though I’m very tempted. I also wish it had more colour in it but I was determined to make one piece with nothing in it except the beads from the kit. I may add a charm though. 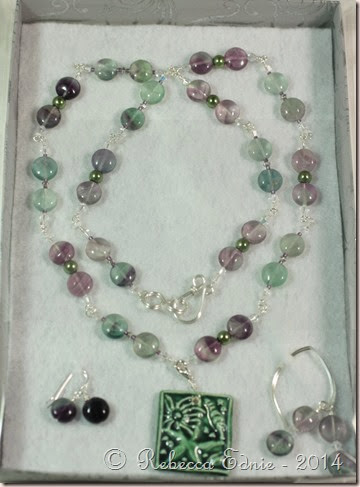 I did make one more piece using the bracelet from the kit but I have crappy photos and have since given away. I would have taken better pix before giving it away but I offered to make something for an Autism fundraising golf tournament silent auction without realizing it was 5 days away! By the time I got the reply and realized I had 3 days to make and deliver it, I was kind of in a rush. I packaged it without thinking and at the last second thought about pictures. Oops. It’s a shame I no longer own this lovely pendant but oh well. And I know it went to a good cause.

Since you can’t see it well, I’ll explain the beading pattern. Purple seed bead (PS), Green Tourmaline coins(GT), PS, tiny white Swarovski bicones PS, GT, PS. Then for the other grouping, it’s a green glass pearl with purple tourmaline coins then a bit larger white Swarovski bicones next to that. Thanks to everyone who made it this far. These alternate all along the length. I attached the pendant with a lobster clasp so it can be removed in the cooler months. It’s hard to see, but I made my own hook and eye clasp. It’s the first time I tried a clasp like this and I’m really proud. Click on any photo to see it better.

Thanks for reading this far and I hope you enjoyed my creations.