I’ve been wanting to make a bathroom sign for a long time. We have two doors close together and even when we direct someone to the washroom, they aren’t sure which door to open. 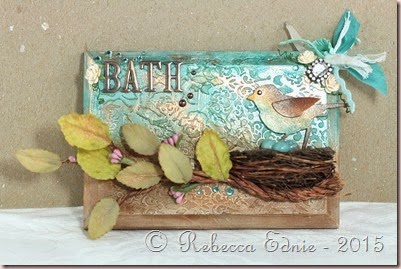 We had a nasty computer paper printed sign in the ugliest font ever since our annual BBQ last summer. I was so sick of looking at it! So I pulled out a plaque that hubby brought home from work. Ya know those ‘employee of the month’ type cheapie plaques?  Yep, one of those. It’s not real wood so I sanded it down enough to let gesso stick and covered it in 4 coats. 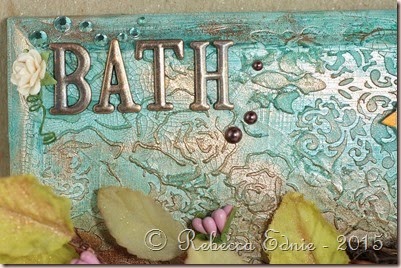 Then I covered part of it in the damask stencil using molding paste. I allowed that to dry then added white crackle paste in a fairly thick layer to the unstencilled areas. After that dried, I added the roses stencil over the crackle. So much glorious texture! (check out the area under the BATH letters in the above photo) Then I added some mists over top. I added a mist to the bottom too but I didn’t like the colour so I over coloured it in Copic airbrushing. That was much better, a warmer colour. 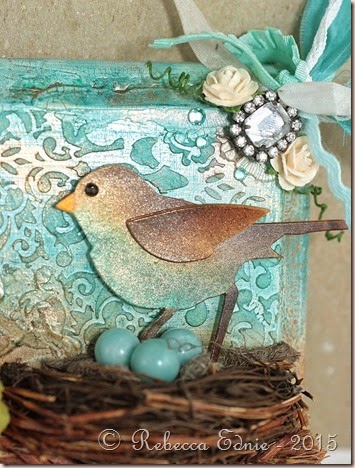 Next I started to work on the nest and branch. The nest was premade but I had to cut it in half first. Before cutting it, I applied some gel medium to the area where I planned to cut it. Not such a good idea. It didn’t dry completely clear so I had to colour it and cover it up with some raffia. What a pain! I’d recommend white glue if you ever need to do something similar. To make the branch, I used some wire covered in some sort of natural twine type stuff. I twisted 5 pieces together, shaped them and glued on the leaves and buds.

The bird was made from 5 layered ivory die cuts coloured with Copic airbrushing. I used a black rhinestone for the eye. I added 3 beads to the nest for eggs. Then last but not least, I added the copper Perfect Pearls, the letters and the rhinestone and ribbon bundle along with some bling. The rhinestone already had a loop on it and that’s how I tied on the ribbons. I really wish you could see this in person; it’s soooo much prettier! I’ll try to add some closeups later. 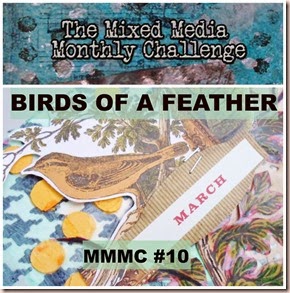 I made this for the Monthly Mixed Media Challenge. This month’s theme was Birds of a Feather. Click the graphic to visit the challenge.

Posted by Rebecca Ednie at 7:18 pm

What a pretty sign! I love the bird on those cute little eggs. Thanks so much for joining us this month at The Mixed Media Monthly Challenge.

Adorable sign!! I need to make a little sign like this for my laundry room!! Thank you for the inspiration!! Thank you so much for playing with us at The Mixed Media Monthly Challenge!!

Very pretty. Love the colors and background work! Thanks for joining us at The Mixed Media Monthly Challenge!

this is such a pretty sign! your guests will surely appreciate it too :) Thank you so much for playing with the Mixed Media Monthly Challenge!
-Rachel
rwkrafts.com