This card is for a girlfriend of mine I have been missing lately. We just never seen to manage to get together even though we don't live far apart. I would have made an 'I miss you' card but can you believe it? I have thousands of rubber stamps (NOT counting alphabets separately) but not one 'I miss you' stamp! So I just decided to make something beautiful that would also work for the week's challenges. 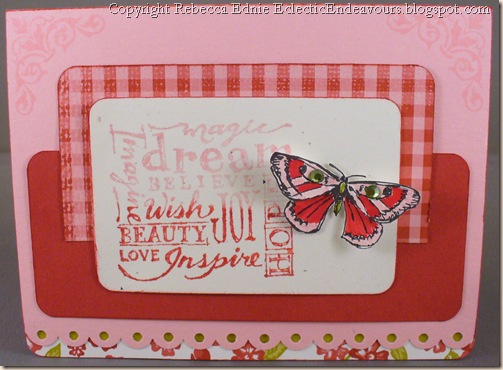 I started with the colour challenge for this week, CC 191, pretty in pink, riding hood red and kiwi kiss. I decided on a pink card base, 4.25x5.5" as usual, I scallop punched the edge but it really didn't do much for the card because you could still see the straight edge of the back of the  card beyond. I put Bella Rosa patterned paper under the edge, rounded the corners and liked it much better. The back corners didn't look right now so I got out my corner punch and rounded them. I really don't use it much so imagine how surprised I was when I looked at the Ways to Use It challenge 191 and it was to use a corner punch! Next I punched holes in each scallop with my Big Bite, again it didn't have enough impact, so I put another strip of designer paper under the edge so kiwi kiss showed through. The paper is actually dotted so I aligned it so the dots didn't show. On the inside I made sure the second layer of paper covered the first so it looks tidy inside.

Then I looked at the sketch challenge, SC 201. It didn't work very well in portrait orientation with my border because the sketch is so symmetrical, so I flipped it to landscape. I layered riding hood red cardstock and another paper from Bella Rosa. Now all I had to do was pick a stamp that worked with the orientation of the sketch. Recently, in my web travels either on Splitcoast or while blogging, I saw someone use Natural Beauty, stamping the words almost as a background with the bird over top. I can't remember if the bird was cut separately and popped up or masked but it was lovely. So I CASE'd the idea only using the butterfly and adding it to the side rather than in the centre of the words. The words were stamped on confetti white paper with pretty in pink ink all over, then one side inked with riding hood red and spritzed with water. I had hoped the colours would bleed more but oh well.

I stamped the butterfly on whisper white paper with black Adirondack ink, hoping to colours it with Copics but since the colours I have didn't match, I went back to my oldies but goodies, my Stampin' Up! markers. Had I known I would use those, I would have stamped with Staz-on, instead I just coloured very carefully. I used pretty in pink, real red and old olive markers, then added 2 four mm ( millimetre, about 1/8") green Swarovski heat set crystals to the wings. I didn't want to get out my hot fix crystal setter for two crystals so I held them with tweezers under my heat gun; worked really well.

When I cut out the butterfly, I slit between the upper and lower wings. This allowed me to get more depth when I popped up the upper wings. The body is adhered with a glue dot, the upper wings have foam tape rolled up under the wings to make a very solid base. I hate when I use foam tape and it squashes flat under pressure, either from mailing or being stuck in my purse til I give it away! So I used a strip of tape, 1"x 1/4" and rolled up the end so it is tight, therefore not easily squishable, and extra high. Before assembling the card I very lightly inked all layers with riding hood red. The corner stamp is from Frames and Flourishes, stamped in pink ink. The only major problem I had was getting all the layers parallel to each other, I had to move several and though I LOVE the new double stick tape I am using, the Glue Glider Pro, it is really, Really, REALLY sticky, making the layers almost impossible to adjust. It is worth it though to know my cards will NOT be coming apart!

One thing you can't see in the photo is that the front of the card is about 1/8" smaller than the back leaving a border of pink next to the patterned paper edge. When DH took the photo he didn't realize it needed to be photographed closed for best effect. We were trying out my new light box set up. the photos are much better now, especially since we used a real camera, not my iPhone!

Posted by Rebecca Ednie at 9:06 pm

Email ThisBlogThis!Share to TwitterShare to FacebookShare to Pinterest
Labels: Colour Challenge, Sketch Challenge, Ways To Use It

All I can say is that I hope we are swap partners one day. Your work is so beautiful!

I especially love this one because of the butterfly.