Oh Nuts! Don’t you hate it when…

I am always messing things up. You just don’t know because 90% of the time, I manage to fix it. The other 10% gets recycled or tossed or I flip the paper and restart on the clean side. I am like a super expert on fixing things so I don’t waste paper! Well, this time I am showing you my mistake for a few of reasons. 1 I worked hard on this card. 2 I promised the people who watched me colour it on Periscope that I’d post it to my blog and 3 while goofed up I think it is still sort of pretty. 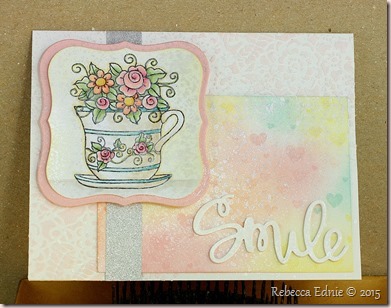 So I was almost done. That’s especially when Mr Murphy likes to come a callin’. I had already made another stacked die cut Smile and covered it with silver Wink of Stella pen but decided it was too dark grey. So I die cut another stack and this time I wanted it shimmery but not grey. So I got out a shimmery clear spray mist. Then I thought, hey, why not place the card behind the die cut so catch the overspray so I don’t waste any and get some rpetty shimmer on my card! Great idea right?

It might have been if my nozzle wasn’t partly clogged and instead of a fine mist I got giant droplets! ACK! Those droplets dried looking like a white mirrored dots over everything. They are so thick with shiimer that they became opaque! Not what I had in mind! The drops also did a number on my image both blocking out the black lines and reactivating them as well so the lines are super fuzzy. But there was just to much work invested in it to turn back! OH, reason 4 to post this anyway. I made it for Mojo Monday and since the draw is random and not juried, well I mgiht still be able to win with this card! Don’t be afraid of your mistakes, just learn from them!

My bokeh panel was sponged with various colours of inks and then I stamped the hearts on top. I used several of the smallest sizes making sure to stamp the hearts in the same colour as the sponging underneath. I tried stamping it otherwise but it didn’t look right so I flipped the paper over and started again. Sounds like me right? The card base is textured using light embossing paste mixed with pink ink applied using a tim Holtz stencil. Then warm microfine glitter was added while the paste was still wet.

Posted by Rebecca Ednie at 2:49 pm

Mistake or not, it's a very lovely card--Love everything you did with it!