So You Think You Can Stamp-Week 1: Wedding View Master Card

What a fun challenge from My Favourite Things! So You Think You Can Stamp, every week the theme is based on a different dance style. This week was West Cost Swing; if you aren’t familiar with it, it has a lot of tricks and lifts so this week’s card had to include a flip, spin or lift element. I decided to go with a View Master Card, I’ve made only a couple before and I made a few mistakes, OF COURSE. I should have looked up the directions again. 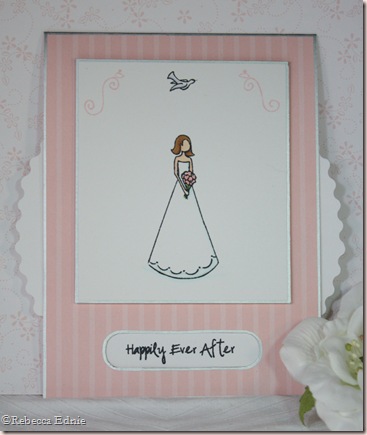 I should have cut the hole first, traced it onto the wheel multiple times and then removed the wheel and stamped the sentiments. A couple are off center and one is down right crooked too. ***SIGH***  Also be sure to measure the length and width of your largest image/sentiment before creating your hole. Remember, the maximum length and width may not both be found in the same stamp. Ex: my tallest sentiment with long ascenders and descenders was not the longest. I had to measure all of them to be sure.

To create my hole with nice rounded ends, I die cut a tag shape. It was too short and I couldn’t have used it directly anyway because of another tag on the same die so I used the negative image as a template and used a craft knife to cut it out. Of course, mid-way I had to slide it over to make it long enough. I extended the lines with a ruler to make sure it was still straight after moving the template. (I had considered die cutting it twice, overlapping them to create one long cut out, you could do that if your die is a single like Nestabilities.) Just be sure when you cut your hole that it centered (if your layout is like mine) and far enough in so that the sentiments won’t show at the edges where the wheel sticks out.

BTW, When I assembled it, I put the brad in so the head is inside the card and the ends are under the focal panel so it looks decent inside. The card edges are finished with a silver paint pen. TIP: To get a perfect line, use scrap cardstock or thin chipboard to press a groove into the felt tip of your pen. Hold your paper up off the table, flex it so it isn’t floppy, place the paper in the groove and slide the pen along the paper’s edge.  When making the groove in the felt tip, if you do it off center, you can even have two grooves, each different depths for different widths of lines.

I meant to add Tiny Twinkles to the scallops on the dress so I will go back and add them. I may also put one in her hair. 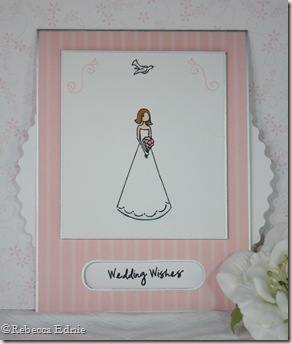 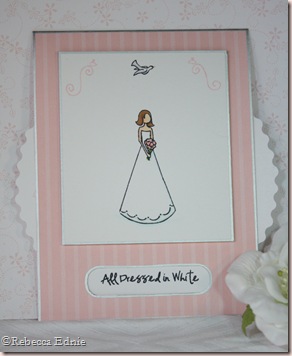 Posted by Rebecca Ednie at 6:25 pm

Email ThisBlogThis!Share to TwitterShare to FacebookShare to Pinterest
Labels: CAS-clean and simple, Copic, Cuttlebug, girlie stuff, MFT, Moving cards, So You Think You Can Stamp, Stampin Up Products, Tips, wedding

Your blog is great! I have not worked with paper before but I ma totally inspired!
Carrie from swap bot