Romance Isn't Dead! Hubby Made Me A Card!

I can't believe I haven't shown this to you already! I meant to do it ages ago! My hubby made me this cute card for our anniversary last November, isn't that sweet? He mostly used stuff that was already on my 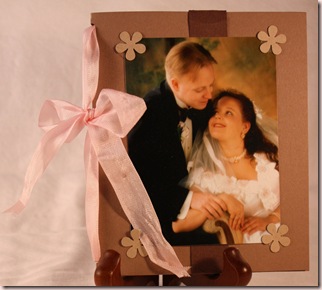 craft table and printed the photo on the computer. Yeah, the ribbon is rumpled (he chose it because it was out on my desk, not realizing that I iron it before I use it) but it really shows how much he loves me and you better believe that romantic gestures are few and far between in our relationship. It was so funny hearing the story of how he made it. He was telling me how he didn't know where I keep anything or what to put where or which glue to use. So he used what was out but he didn't know how the ribbon stays on or how to tie it properly :) Guess it occasionally pays to leave your craft area messy!The fold of the card has punched holes in it using the Crop-a-dile to thread the ribbon through. Figures a man would use the one tool that most closely resembles pliers! I think it is a pretty good job considering the only other cards he has made are the ones printed on those card blanks you get from Staples with tons of clip art and word art! He even managed to find the right size of envelope! Thank you, honey!

Well, if that isn't one of the sweetest a stampers' hubby can do. Blessed You.
Erica

how did i miss this before? oh yeah - not much time for blog reading!!

how sweet of him to do that for you! ya'll make a gorgeous couple - great shot from your special day!!