I pulled out some beads I’ve been meaning to use and made a necklace and a bracelet. 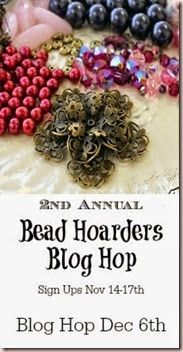 I have to admit, these pieces don’t use special, hoarded beads. But I haven’t been amassing a stash for very long and the only beads I’ve had for a while are super boring and on their way to donation. There’s a difference between old and hoarded. The former is kept though their usefulness is pretty much over because we hope they might come back in style or we might need them again and the latter are saved for a really special project. Lots of oldish, not so much hoarded. 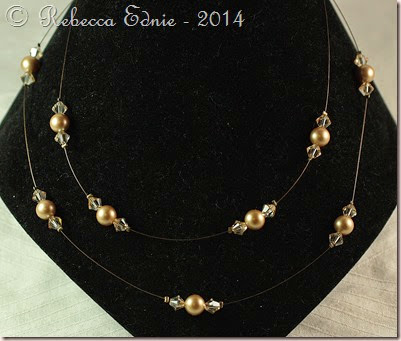 This one is made from Swarovski pearls and crystals. I bought them to go with a strand of tourmaline chips. I should have known better than to buy chips. I love when other people use them but I never seem to get them right. I tried to make the necklace I saw in my head but it just didn’t look right. The chips were too big and the Swarovskis too small. They were too close to the same size. As I unstrung the necklace, I ‘saw’ this! Yeah! So lovely. I know it’s pretty simple but I’m happy. 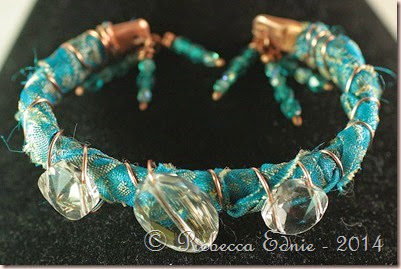 I saw a book or video ad for jewelry made from copper tubing and I was so inspired! This is made from about 6” of copper tubing formed into a bangle shape. I rounded the raw ends, filed them and punched a hole. I wrapped some awesome fabric around the bangle and held it in place initially with a clothespin and then permanently with 20g copper wire. While wrapping, I added some Swarovski crystals; they look clear but are actually silver shade. Lastly, I hung some Czech crystal dangles on jump rings which I attached to the ends. 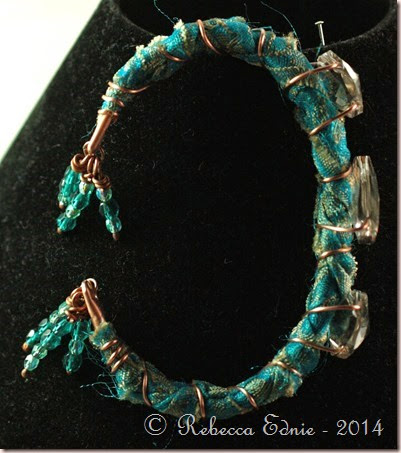 I hope you enjoy my creations. I’d love to hear what you think so if you’d take time to leave a comment, I’d be thrilled. Thanks

Simple works fabulously with so many things. The necklace is a classic and you will get a lot of wear out of it. The bracelet is so very creative and outstanding. Enjoy your new jewelry.

Love the bracelet. I love how so many of us are working fabrics into our designs, but still making the beads the statement. Nice.
The necklace is very tasteful. Funny about the chips - I probably have about 8 or 9 different 'hoarded' strands - because they NEVER seem to be right for what I'm working with. Maybe it's time for a chip bead hop! LOL.

Hi Rebecca, Your necklace is simple but beautiful. The cuff bracelet is inspiring. I am going to have to try using some of the copper tubing that I have. I hope that you don't mind me using your idea. I really like your bracelet.

LOVE the fabric on the cuff! Very nicely done - just a hint of glamor with the beads!

If you aren't getting many/any comments, maybe let Lori know that the link to your blog is not quite typed in right. :)

I think you fell right in the spirit of the challenge ! I love that bracelet :)

The bracelet is definitely creative. Great use of fabric with the copper. The clothes pin idea is helpful too.

I think you're absolutely right. Hoarded beads do NOT have to be expensive beads at all. Generally, if I haven't sold something in a year of being shown, I take it apart and make something else out of it, and nine times out of ten, it sell. I have no idea why, but the beads were still loved, so I had to keep working with them!


Thank you so much for participating, and don't forget to post your pieces in the special Pinterest board, http://www.pinterest.com/limamike/bead-hoarders-blog-hop/, and join the Facebook group (also welcome to your friends) www.BeadSoupCafe.com -- hope to see you at other hops!

Beautiful! Thank you for sharing your work with us. I particularly like the use of the fiber with the copper. Multimedia! Yum!

That bracelet is something special. Love the style and colors. You did a fantastic job.

Very pretty illusion necklace and your bracelet is great. I love the wire and fabric wrapping over the copper tubing. Works really well.

Oh, Rebecca...that gorgeous "floating" necklace! I love it so, so much! I have exactly that problem with gemstone chips...they never look right to me when I use them, although I LOVE them when other designers use them. A conundrum. I have a huge coil of copper tubing that I had no idea (until now) how to put it to good use. Thank you so much for the inspiration!

Love both pieces you made but your bracelet is really awesome and so creative!

The necklace is so lovely and airy and the bracelet is very inovative, well done!
Jackie