Hi everyone! I hope you enjoyed celebrating World Card Making Day yesterday! I had so much fun making my card I ran out of time to blog it! 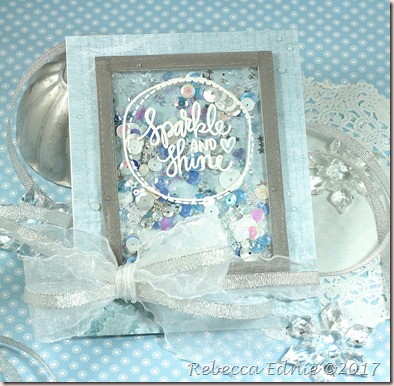 Simon Says Stamp has a WCMD challenge to make a holiday card. I don’t celebrate any holidays so I made a winter card that could be used for a holiday, just not by me! 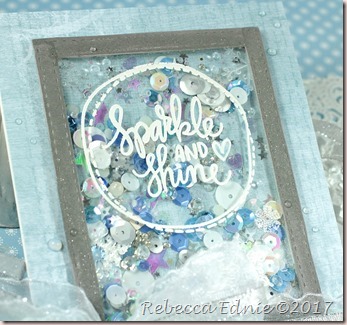 I used background paper by Kaisercraft with a subtle snowflake and flourish print. It’s so subtle the camera really doesn’t pick it up well especially with so much going on but it is very pretty. The frame was cut from grey cardstock with double stitched rectangle dies by Simon Says Stamp. I did some partial die cutting so the frame is a bit shorter than usual so I had room for my ribbon at the bottom. I used a silver Wink of Stella glitter pen to add some shimmer to the frame. Though I worried that the frame ended up too dark, when the card was completed, it gave the card some contrast it needed since it is so monochromatic. 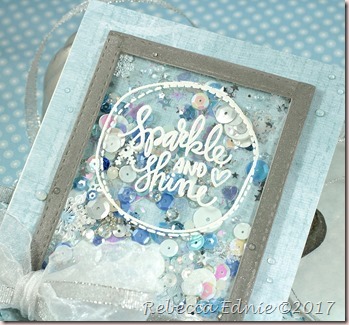 I used Heat Resistant Acetate by Hot Off the Press to make my window. Even though I melted embossing powder repeatedly, there was only minimal warping so I was very pleased. For the main sentiment (SSS), I used white embossing powder first then after that was cooled, I stamped again this time using Hero Arts white pearl embossing powder. It worked out wonderfully! The height of the previous layer gave the pearl powder more dimension so it looked more pearl-like and the opacity helped it to look more white. You can see how the white pearl powder looks on the acetate by itself as I used it to stamp some snowflakes. It shows up best in the corner right above the bow in the previous photo. It has a bit of a silver pearly sheen while being still quite translucent. 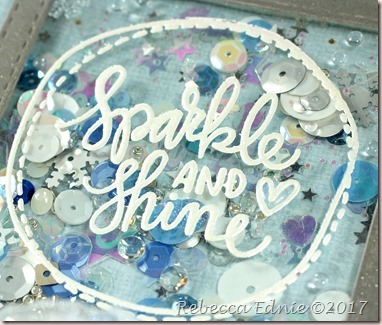 For the goodies inside, I added lots of white, blue, clear and silver sequins along with some snowflake, heart and star confetti. Oh, and a few white iridescent and clear gems. I think that’s it! :) I didn’t use a specific pack but rather bits and bobs from a lot of bags of Lucy’s Cards. Then there is my bow using May Arts white crinkle ribbon, Stampin’ Up! silver ribbon from an eon ago and a final touch of Morning Dew Nuvo drops on the card and acetate.

This is so very beautiful!!! Love the embossed image over the acetate and the pretty colors. Hugs, Autumn

Oh, how pretty! I love that you stamped on the acetate! The color palette is just gorgeous! Thanks so much for sharing with us at Really Reasonable Ribbon Anything Goes Challenge #173.

Love your gorgeous project! Thank you for joining the Really Reasonable Ribbon Challenge!