I was feeling vintage and shabby today so my cards reflect that. This card is for a sketch challenge, Sketchy Thursday #52, ESS52.  When a challenge is actually not difficult, does that mean it should be called an ‘easy’? I’ve never played this one before but the prize is awesome. A $52 gift certificate for one of several top-notch companies. But there is a catch, no prize unless there are 52 cards minimum and this challenge usually only attracts about 10 players. You can enter more than one card so I did two for now, I might do another one or more later. This card also works for Sharon Johnson’s No Time to Stamp challenge #103, ssnotime103  to overstamp your sentiment. 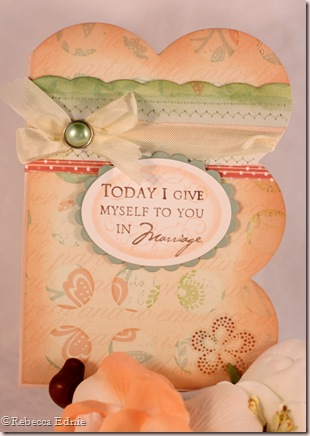 I am still pretty new to shabby chic style cards. I always seem to need to look at my favourite shabby bloggers cards for ideas when I get stuck. Melissa Phillips rescued me today! The paper has the large scallops already giving me a great start for an interesting card. The paper strip is sewn on with three rows of stitching, it is hard to see but the thread is light green. In the oval, this was originally one clear stamp, I cut off the flourish and stamped it twice in blush ink and overstamped the sentiment. Then it cut it out with Nesties and leaving it in the die, I sponged the edges.

Posted by Rebecca Ednie at 8:23 pm

Oh, great take on the sketch, really like how you turned it and how you used a scallop shape card with a great color combination! :) NICE!

Wowie Rebecca this is stunning! And what a fabulous take on the sketch. Thank you so much for playing along with the big #52!!