I am recently getting into mixed media. This canvas features one of my favourite quotes and was for a swap I hosted on Swap-Bot. It is only my second canvas ever (here is my first canvas- Friendship Canvas) so be kind but I was pretty happy. 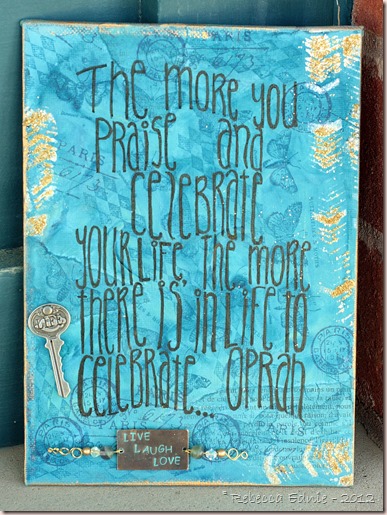 It was lacking a bit of depth I had hoped for as the second layer went on darker than I meant for it to and I had a technical problem with the glitter but other than that I am very pleased. The first layer on my 6x9” hard canvas covered board was a partial layer of gesso added mainly to the center, scraped on lightly over most areas but then added thickly in a few swirly shapes using a palette knife. They are hard to see in the photo but you can see the largest one under the U and R of Your.

Then I added a mix of three colours of acrylic paint, turquoise, mint and navy which I applied with my fingers getting a marbleized look. When that was dry, I adhered torn sections of French book paper (bottom right-seen below in close up, middle left, top towards the left.) To colour that, I created an acrylic paint and water wash with the turq and navy only. I applied it and realized I had WAY too much so I added it to the whole canvas so as not to waste it. I had deliberately not mixed it well so it had cool blobs in it and I loved how it puddled and pooled especially against my gesso swirls. You can see the pooling especially in the top left corner.

The next step was to check how large I should write my text on scrap leaving enough borders for embellishing. When I was happy, I drew similar wavy lines on my canvas and used an India ink pen to draw in my letters between the lines making them look uneven and whimsical. I added some accents using a chevron stencil and white pigment ink sprinkling on some vintage glitter while the ink was wet. Problem is, I had remembered this technique using paint, not ink and the glitter started falling off! Plus, I should have waited until after I had done my stamping to both stencil and glitter! So I brushed off as much glitter as I could (some did stick!) and used glossy accents to add the glitter back on. Fortunately, the stamping worked well right over the stencil/glitter combo.

I used only two colours for the stamping as they were the only colours other than black which I didn’t want to use which were dark enough. That’s why I was disappointed by how dark the base turned out. But I stamped off on some stampings to get a lighter tone for some variation. I’ve lightened the photos slightly to show the detail. I might have tried more lighter inks using pigment inks but most of mine are so old they are probably dried out and I don’t have reinkers. To be honest, it didn’t occur to me until now! I used a gilder’s paste to highlight the edges of the canvas (LOVE that stuff!) and added a key using a brad and Glossy accents. Finally, I stamped a patinated metal blank then covered it in acrylic paint to highlight the lettering, wiping off the excess so only the recessed areas keep any paint. I added beading wire and beads curling the ends to add interest and keep the beads on. It was added with foam tape.

I’d love hearing if this is off any interest to you. I will still post it anyways but perhaps with less detail of my process. Please feel free to comment either way, I won’t be offended if you only visit for the cards!

Posted by Rebecca Ednie at 5:37 pm